Micheal, who has been in post for 13 years, kindly agreed to answer our questions about the occupational therapy offered at Fairview Adult Day Care Center in Brooklyn. Here he talks about his work and how the therapy, along with positive thinking, can help people with the healing process.

Can you tell us about your work at Fairview?
I work in the Traumatic Brain Injury section, together with the mainly Russian-speaking geriatric group. I work with all sorts of therapies–upper extremity and basic rehab services, muscle strength, fine motor coordination, gross motor coordination, visual-perceptual skills, memory, cognition, social skills, ADLs, which is Activities of Daily Living, and IADLs, which is Instrumental Activities of Daily Living. All of these promote endurance. 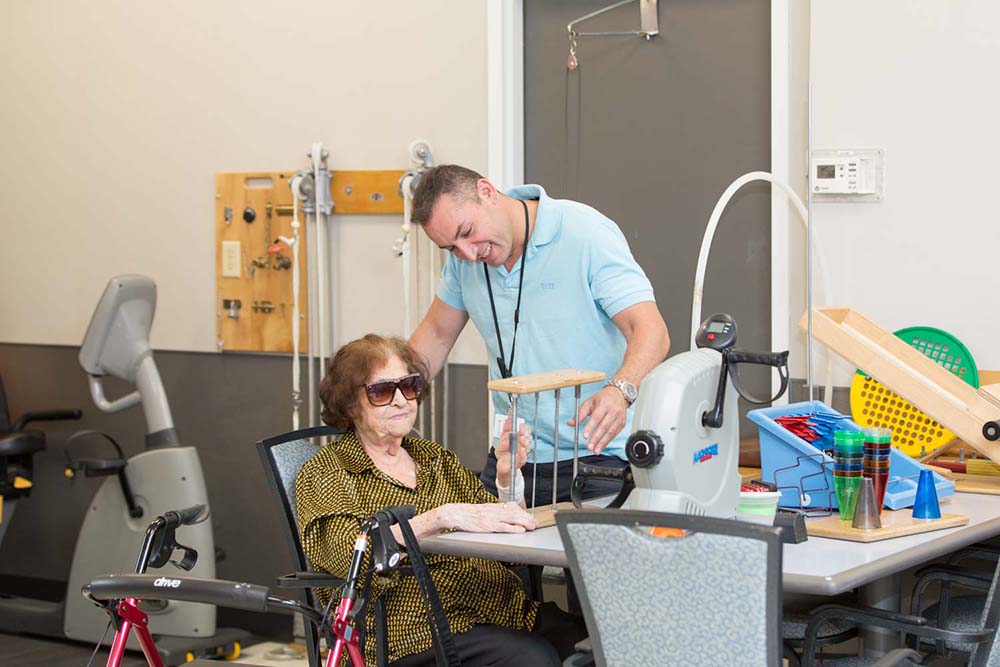 Even though this is a day care center, some of the residents have serious health issues. Some of the people are older, and they fight through a lot of pain to get here. We have some people that walk around. We know they’re in a lot of pain just getting from Point A to Point B, but they come to work out, they come to stay healthy.

Many of the Russian-speaking geriatrics are healthy in many ways, but they wouldn’t be here if they were well. A lot of them have diabetes, heart issues, heart failure, hypertension, and thyroid issues. They might have frozen shoulders or be suffering from a stroke. Some have issues that are long term, such as injuries to their arms. Maybe they had strokes years ago and are still dealing with the consequences. We deal with that.

They have memory problems, issues with doing ADL. We assess them and give them new techniques for how to dress, or how to get things done. We do their grooming, their shopping, cooking–anything we possibly can to make their lives easier. As far as possible we want them to be independent so they can do things for themselves where it’s safe and where they’re not at risk.

How do you help people with memory issues?
We do a lot to help people with their memory problems. I can see people’s memories improving dramatically. As people age, exercise helps improvement of memory and cognitive function. Part of what we do is to keep people engaged. We try to keep them active, which keeps the blood pumping around their body, keeps them independent, keeps them out of nursing homes and, we hope, out of hospital. This is our main task.

Sometimes it’s easy to be critical. You look at things over a long period of time where people are, or where they could have been. It’s amazing to see how they’ve changed, not just physically, but in their attitude, and how it’s all interlinked in terms of what they’re able to do.

Most of the people who come here want to be able to take care of themselves. They don’t want to be dependent; they don’t want people taking care of them. Just watching that drive in them and helping to facilitate them being independent, or as independent as they possibly can be—that brings out a whole different aspect of who they are and keeps them at a different level.

We have a lot of very old people here. I’m not exactly sure where they’d be if they didn’t come here regularly. Would they be in a hospital bed, or would they be at home, unhappy? A lot of what we do is helping them to function.

What else do you do to help your clients get better?
Staying positive is really important. One of our aims is to help them to empower themselves. They’re not going to do anything if they’re not empowered. If they believe they can do something, they will do it. They need to believe in themselves. That’s part of my job. It’s part of the physical therapist’s job. It’s part of the speech therapist’s job. We all try to do that.

I think in the grand scheme of things we have a good group of people here that can understand the whole process. We try to work with each other, independently and inter-dependently. One of the reasons I travel an hour and 10 minutes every day is because it’s a great job and it’s worth it.